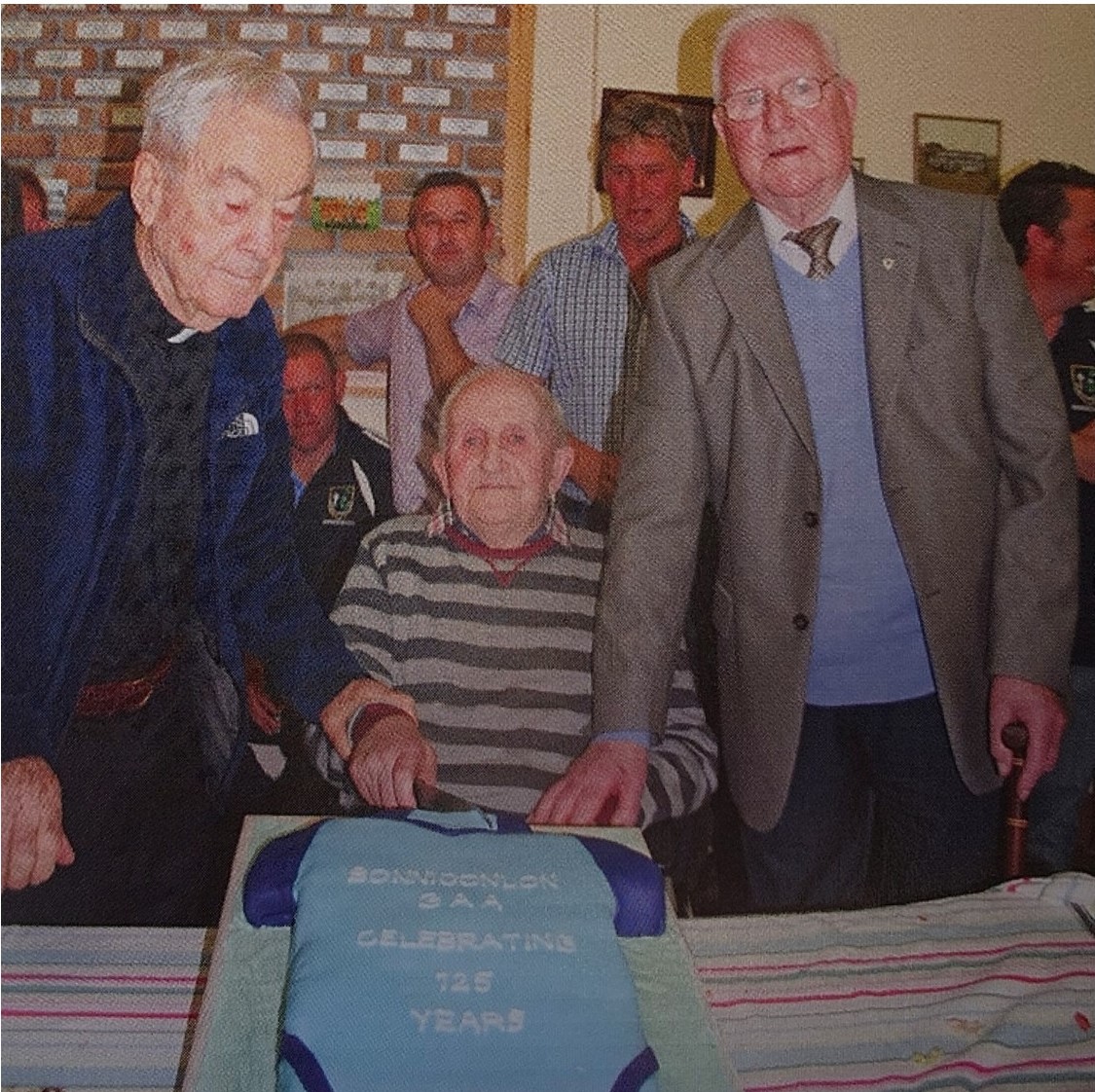 My earliest memory of Bonniconlon GAA field dates back to 1932, the year of the Eucharistic Congress. On the 6th of January that year I went hand in hand with my late mother to the church.

We walked from Kilgarvan on the Mass path (a short cut from Kilgarvan to Bonniconlon) through the GAA pitch, which was part of the Oatlands estate, a rundown property owned by Frank Barber who resided in the old Oatlands house.

I never met Frank Barber but often saw him walking through his lands with a double barrel shotgun. The lands were sparsely populated with animals. Frank Barber who was a protestant and an ex-RIC officer never objected to the Mass path being used.

The layout of the GAA field at that stage is the exact opposite of what it is today. The goals were placed north and south whereas today they are east and west. The goalpost at the northern side was quite close to Foy's land. Near the goalposts was a cluster of furze bushes which were generally used as dressing rooms. The clubhouse is located on that spot today. The southern posts were beside the farm road which was non-existent then. The road was built 1936/1937 when the land was divided/striped.

Fr. Eddie O'Hara, the local curate at that time and also the chairman of the Mayo Co. Board, was instrumental in acquiring the land for the GAA pitch. When the land was divided in 1936, the best field went to the GAA.

Fr. O'Hara, a native of Swinford, ministered in Bonniconlon for 14 years approx. In later years he was appointed to Charlestown as PP. The pitch in Charlestown was later named as the Fr. O'Hara Memorial park. I was fortunate to know him well. I served mass for him six days a week for six years. Legend has it that while PP of Charlestown, his relationship with his curate was strained. A local parishioner called to him to have documents signed but he failed to find him. The parishioner had no choice but to go to the curate and the curate asked why he did not go to the PP to get them signed. “I did," replied the parishioner, "but failed to find him." The curate's reply was that he should have hopped the football outside the door and he would have found him!

My first game with the Bonniconlon team came about by accident in 1942. Bonniconlon was playing against Ballina on home ground and I was approached at the front gate by Mick Foody, a strong supporter of the GAA and the club. He said to me.... 'young Muldoon it's time you togged out for the club, you never did a hard day's work in your life.'

I had a successful debut in the forward line. Jack O'Leary was full forward and I was half forward. I can remember as clearly as if it were yesterday fisting the ball over the defender's head to O'Leary, John Neary called from the side-line to the Ballina player ‘the young lad codded you.' O'Leary scored and we won by a point. The following Sunday we travelled to Moygownagh. We cycled to Ballina (many of us on bad bicycles) and were taken by hackney car to Moygownagh. This was during the war years and it was difficult to get petrol for cars or buses. We won that game by a point. We returned by car to Ballina and cycled home to Bonniconlon. The return match was the following Sunday in Bonniconlon and we lost by a point. The managers at the time were John Neary and John Judge. We were trained by a worker in Lawrence's whose name I can't recall. I can remember one incident very clearly.... I was given a pair of football boots before a match by John Neary and a fellow team player walked off the pitch in protest and refused to play.

Football boots were a luxury as we played the football games in our everyday shoes. The GAA club had no money. Shillings and pence were collected from the players to fund the club. We also held the occasional Sports Day as a fundraiser and bicycle racing was one of the events. The Mangan Brothers from Mountbellew, who were accomplished cyclists, often cycled to these races to participate and regularly won. The prize was £l or 10 shillings. The biggest problem facing Bonniconlon GAA in the 1940's was immigration. Once March or April came, the majority of young men went to England for seasonal work. I became secretary of the Club in 1943/1944 at 19 years of age. I left that position when I joined the Gardai in June 1945.

After six months Garda training in the Depot at the Phoenix Park, Dublin I was transferred to Moycullen in Galway. The GAA situation in Moycullen was similar to that of Bonniconlon and indeed of most rural clubs at the time. In some regards the situation in Moycullen was worse than most. There was no football team as the old team had retired. There were no funds in the club and in fact there wasn't even a football. There was a hurling club with money in existence. To restart the football team, I gave some money to a Moycullen player who was a student in the uni in Galway. The young lad purchased a second hand football for a pound (£1) in a pawn shop in Galway city. We were lucky that our local school principal, Joe Higgins, who was from Claremorris, paid for our buses to travel to the local matches. I used to collect pennies and shillings from the players on the bus and refund Joe Higgins. We played in the west Galway championship at junior level but had no luck. I was captain of the Moycullen football team while playing with them and played at both full back and centre field. In 2020 Moycullen were crowned senior Galway county champions, their first ever title.

In February 1950 I moved to Eglinton Street, Galway on transfer. I joined the Fr Griffin senior football team which was city based but had no club pitch of their own. They played their home games in the sportsgrounds on College Road. Fr. Griffin's had been Galway senior football champions in 1948 and 1949, having only been formed in 1947. I won a senior county medal in the 1950 championship and a county league medal in 1953 with them. While playing with Fr. Griffin's I played at mostly centre half & right back. In 1950 some members of the Fr. Griffin's team were involved in a serious traffic accident outside Loughrea. On the way home from a game three members of the team were killed. I was due to go to that game but my sergeant in Eglinton Street at the time refused me permission for time off. As the Fr. Griffin's team consisted of players from all parts of the country it was difficult to instil a team spirit amongst the players. The team faded after a few years and that was no surprise!

In June 1953 I was home on holidays in Bonniconlon and I played my last game for Bonniconlon against Aclare in Co. Sligo. We travelled to Aclare in the back of a lorry - an open back turf lorry- almost 40 of us. We were stopped at Lough Talt by a guard from Aclare and our names were taken. I gave my brother's name, Ted, who was in the USA, as I was registered with Fr. Griffins in Galway. I played centre field that day and my partner was Mickey Cowley from Cloontia,. We had a big win and when it was all over Anthony Kerrigan's words to us were, 'ye destroyed football in Aclare today'

In 1958, newly stationed in Ballycastle, Bonniconlon football featured again in my life. I was investigating an incident following an altercation in the town one evening. The following comment was passed ......”hold a minute Sergeant, you don't know those Bonniconlon

fellows........they would eat you without salt out there....we used go out there to football matches years ago and your life would be in your hands.”

To which I replied, “They can't be that bad.'

In 1950 my name was put forward for a trial game with Mayo. My nomination was objected to at the meeting. That ended my career with Mayo!!!

In 1950 and 1951 I was a substitute on the Galway county panel but never made the starting 15.  Like a lot of county teams unfortunately there was a lot of politics involved, a lot of jealousy and bitterness. If you were not part of the “circle' you did not get on the team. During those years Mayo was the dominant team in Connaught.